Bitcoin is currently trading at US$388.40. The next 12 months should see a massive rise.

Anytime one discusses the price of Bitcoin they are wise to keep in mind the Cohen-Seidenburg theorems because of the wildly fluctuating nature of humans since it seems everyone loves to chase the rabbit. And just because you chase the rabbit doesn't mean you will get it!

PAST CALLS ON VALUATION

Four days ago I received an email from a reader and friend that asked:

Considering where we are now in price, where do you think might be a good entry point for a significant purchase?

My response? "We are already well into the next bull market. Read my article from 2012 to understand why."

On 31 Dec 2012 when most people did not even know what a Bitcoin was, including my friend who recently emailed me, and the price was around $13.20 I wrote the article During 2012 Fiat Currencies and Gold Collapse Against Bitcoin. There really are a lot of gems in the article for anyone who is seriously looking at Bitcoin.

[pullquote]Thus, the $100B question is: Are people willing to spend money to hire Bitcoin?[/pullquote]

The interesting thing about science and real economics instead of political dogma is that the principles apply across time.

In that article I thoroughly discussed how the price of Bitcoin is determined. Since the supply is known the exchange rate of Bitcoins is composed of (1) transactional demand and (2) speculative demand. I even had a fancy little graph with a quote to really get the attention of readers for this section:

The above chart shows the total transaction fees Bitcoin miners received on a daily basis and is normalized to a 200 day moving average to filter out the daily noise. As the chart plainly reveals Bitcoin is rapidly being adopted and used on a daily basis. 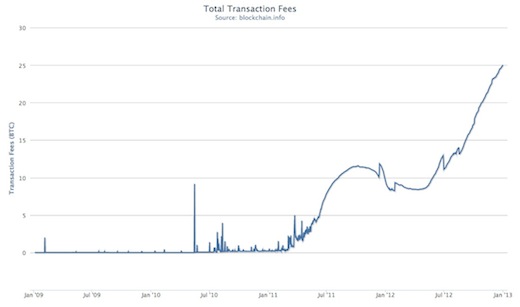 WHERE BITCOIN IS TODAY

When I started publicly talking about and recommending Bitcoin it was around $0.25. Then it had a major run in mid-2011 to $32.00 and crashed to around $2. Some of us took that opportunity to get some USD liquidity and make venture investments to build the ecosystem.

During 2012 there was about $2m of venture capital investment for the entire ecosystem. That is not entirely accurate since some of us made substantial investments that were not reported publicly.

Since then there were publicly reported investments of $95m in 2013, $362m in 2014 and $482m in 2015 for about $1B total. For example, Bitpay has raised an additional $30m and competitors like Coinbase or Circle have raise over $100m. There is a real and legitimate ecosystem and industry forming around the core Bitcoin protocol.

And all of these companies are building software to satisfy use cases and add value. All of this activity entrenches the fifth order network effect of developer involvement. There are now a ton of ways for individuals to use Bitcoin. Thus, the $100B question is: Are people willing to spend money to hire Bitcoin?

So, how much are people paying to hire Bitcoin and how does that compare to the past? 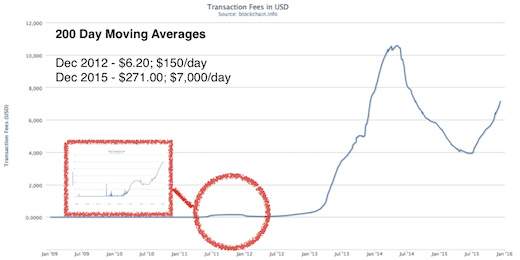 Transaction fees are the barometer for how much value the Bitcoin network adds to society because it shows how much people are willing to pay to use it.

Everyone has opinions. Not everyone has money. What opinions matter? What opinions do people really care about? The ones money gets staked on. The more money at stake the more important the opinion.

Think the scaling Bitcoin discussion could pose a threat to Bitcoin's price? Then sell your bitcoins (if you have any); it is that simple. Or, even better, if you are able then short Bitcoin. Some people like bear roadkill.

After all, the market will determine who was correct.

If block size, block interval or any myriad of other reasons were the driving cause for people hiring Bitcoin (buying and holding; not spending which is actually firing) then we would see a lot more activity in the price of Litecoin, Dogecoin, Ether, XRP, etc. But we do not see that price activity and Bitcoin's market capitalization is about $5.9B of $6.47B or 92% share. The market is speaking.

This is why the experiments need to happen in those projects playing second fiddle on the junior varsity team instead of in the real professional project. Plus, in the extremely unlikely event that any of those playing second fiddle [why are they playing second fiddle in the first place?] are able to develop a significant innovation then Bitcoin, where the professionals with the brainpower are, will most likely be able to incorporate the change(s) and foreclose the ability to supplant the other network effects to such a degree that it poses any material risk to Bitcoin. Thus, it is better to do it right than do it first.

The bear market of the past two years has been brutal, hard, necessary and good. But now it is time to strap in!