[pullquote]And like Babe Ruth 'calling the shot' I am finding these investment grand slams are getting more common.[/pullquote]In early June 2013 I presented at the Bitcoin Conference 2013 and have since changed the legal discussion around Bitcoin to one of freedom of speech.

One thing that made me particularly happy at the conference were all the people who went out of their way to come up and thank me for helping make them extremely rich.

You see, for an investor or speculator a 100x return is oftentimes the stuff of legends. Sure, you can get lucky once and maybe even twice. But with the arrival of Bitcoin four years ago a new category of currency was created. And like Babe Ruth 'calling the shot' I am finding these investment grand slams are getting more common. The rate at which capital is being created, generated and transferred is astounding.

While some people, like Chris Duane, whine about it the wise are knocking in runs to tally points on the scoreboard. So, roll the Q1 and Q2 2013 replays!

[pullquote]But keep in mind that you make money when you buy not when you sell.[/pullquote]INVESTMENT GRAND SLAM

What is an investment grand slam? I like to consider four particular elements: (1) ability to quickly settle into a non-seizable asset, (2) privacy, (3) moral or ethical and (4) a ROI in USD greater than 1,000% in less than 12 months.

Liquidity and censorship-resistance. Liquidity is extremely important so I am looking for assets that have market capitalizations in excess of $20m and weekly volumes greater than $1m. Unlike a bank or brokerage account so long as the private keys are protected it is almost impossible to seize or confiscate the assets.

In an era of deposit confiscation for bail-ins like in Cyprus, rampant theft of customer segregated assets like MF Global and general financial pandemonium therefore I want investments and assets that can quickly and easily settle into something like Bitcoin which is held in personal possession and is neither seizable nor subject to counter-party risk.

Pseudo-anonymity. Privacy is increasingly becoming a rarer and rarer commodity. After all, it was on How To Vanish where I first recommended Bitcoin on 17 Jan 2011 and started seriously stirring the discussion in the blogosphere. Bitcoin is not anonymous but pseudo-anonymous. Additionally, there is no account like with a bank or brokerage. This means there are no form TD-F 90-22.1, an FBAR, FACTA reporting requirements, 1099s, AML/KYC compliance or any other pesky price floors, in terms of privacy, being placed on me or my assets. The bottom line is that although tax liability may still accure, I recommend everyone pay what they legally owe because there is really no reason to be looking over your shoulder for these costumed thugs, and the actual payment is more consensual.

Moral superiority through express voluntary and consensual relationships. Violence or coercion interferes with the pricing mechanism and economic calculation of market participants. This leads to misallocations of capital and wealth destruction. The State is great at introducing these types of annoyances into the otherwise peaceful associations of individuals.

By contrast, Bitcoin is used by voluntary mutual consent by market participants. Unlike record or movie companies, pharmaceutical companies, patent holders, etc. there are no price floors that rely on the violence of the State. Consequently, wealth creation and generation can happen in a much more predictable environment.

1,000% ROI in less than 12 months using the USD as numeraire. This should be pretty self explanatory. In other words, it means you make a crap-ton of money really, really fast. But keep in mind that you make money when you buy not when you sell.

[pullquote]Bitcoin and the crypto-currency economy has, through sheer force of will, clawed out massive investment returns.[/pullquote]BITCOIN

Current market capitalization is around $1B with daily volumes around $5m.

As already mentioned, I first publicly recommended Bitcoin around $0.25. Currently it is trading around $92. That makes the return about 36,800% in about three years.

But what about lately? Well, on 23 Feb 2013 I did an interview that was published 7 March 2013. Around 11:40, when Daniel wants to close the interview, I go out of my way to make a Bitcoin price prediction and talk about one of the investment grand-slams Satoshi Dice.

Sure, at the time of the interview Bitcoins were trading around $30 so there is only about a 300% return in three months. But on 31 December 2012 I wrote an article recommending buying bitcoins due to undervaluation and they were around $13.40. With plenty of opportunities to sell at $134 or higher making the 1,000% return in less than six months definitely possible.

And it is Bitcoin's increasing use as a settlement currency that is deepening the crypto-currency capital pools.

Current market capitalization is around $50m with daily volumes around $2m. 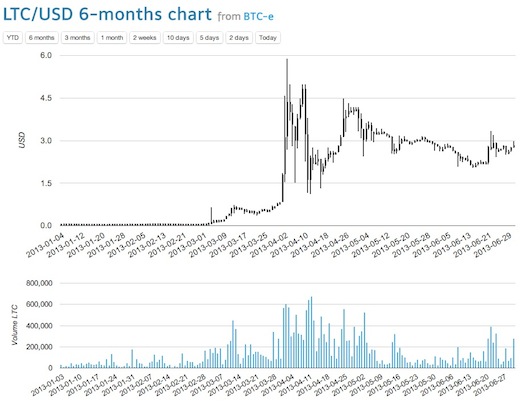 In the previous interview it showed the Bitcoin Special Report that could have been purchased by the Future Money Trends guys for $10. In that report they quoted me extensively and actually recommended Litecoins. At the time Litecoins were trading around $0.10. Today they are trading around $2.85. That makes the return about 2,850% in about three months.

Current market capitalization is around $20m with weekly volumes only around $50-500k. This is the weakest case of the four investment grand slams but it still adds materially to the scoreboard.

In the previous interview I recounted the Satoshi Dice example. On 4 January 2013 I wrote a brief financial analysis of Satoshi Dice which trades on the Bitcoin stock exchange MPEx.

While it is currently trading around $0.187 the price has ranged from 0.0075 to .0020 bitcoins with plenty of opportunities to sell for at least $0.50. But the returns for people who did act on my brief financial analysis and have not recognized their gains is still about $0.235 or about 373% in about six months.

Current market capitalization is around $160m with daily volume around at least $400k. I have not publicly recommended ASICMINER so I may just be a spectator.

ASICMINER is an interesting company with a fairly low profile and lacks an official website. Friedcat, the pseudo anonymous operator from China, just keeps throwing up points on the scoreboard. It is a leader in the ASIC mining technology and sells out massive amounts of hardware.

Some people bought their ASICMINER shares around $0.10 in mid-2012. But with the GLBSE nonsense and other issues we will just use the price from early March when it started trading on the passthroughs for about 0.65 BTC or $26. Each of those little circles represents a dividend, about 0.112 bitcoins in June or approximately $1m of dividends per week, which are paid on a weekly basis in bitcoins. Currently, it is trading for about $425 per share.

That makes for a return, not counting dividends, of about 1,500% in about three months.

On another note, an interesting phenomena is happening with Bitcoin as it is increasingly being used as a numeraire to perform economic calculation by market participants because of the rapid and substantial developments happening in the mining sector. This is revealing a more advanced evolution of crypto-currency which indicates a very promising portent to economic strength.

Bitcoinlandia is a place of mythical investment grand-slams that turn into reality. So a review of some of the runs recorded on the scoreboard during Q1 and Q2 of 2013.

If you are new to Bitcoin then you may want to get a copy of my Free Bitcoin Guide. This is a market like none other that is creatively destroying the currency and financial markets.

Another interesting point is that reserve currencies force themselves onto the world stage by sheer economic power resulting from sound fundamentals and global reach. I have not really considered Bitcoin a contender for the world reserve currency. At best, perhaps in 20 years, it would sit alongside a Yuan, Yen, Dollar, Euro and South American currency.

But all of those competing fiat currencies have significant problems with stifling monetary innovation. Not only are the fiat currencies technologically inferior but they and service providers are trammeled with regulation. It is like a baseball game where one side can only use their arms instead of bats.

In spite of regulators threatening to use violence against innocent people engaged in freedom of speech; Bitcoin and the crypto-currency economy has, through sheer force of will, clawed out mythical investment returns.

We are only four years into this censorship resistant crypto-currency experiment. The types of investment returns being recorded on the scoreboard are legendary. This is how intergenerational wealth can be created. Where Bitcoin and the crypto-currency market and economy go from here is anyone's guess. But I am willing to bet that a lot more runs are going to get recorded on the scoreboard!